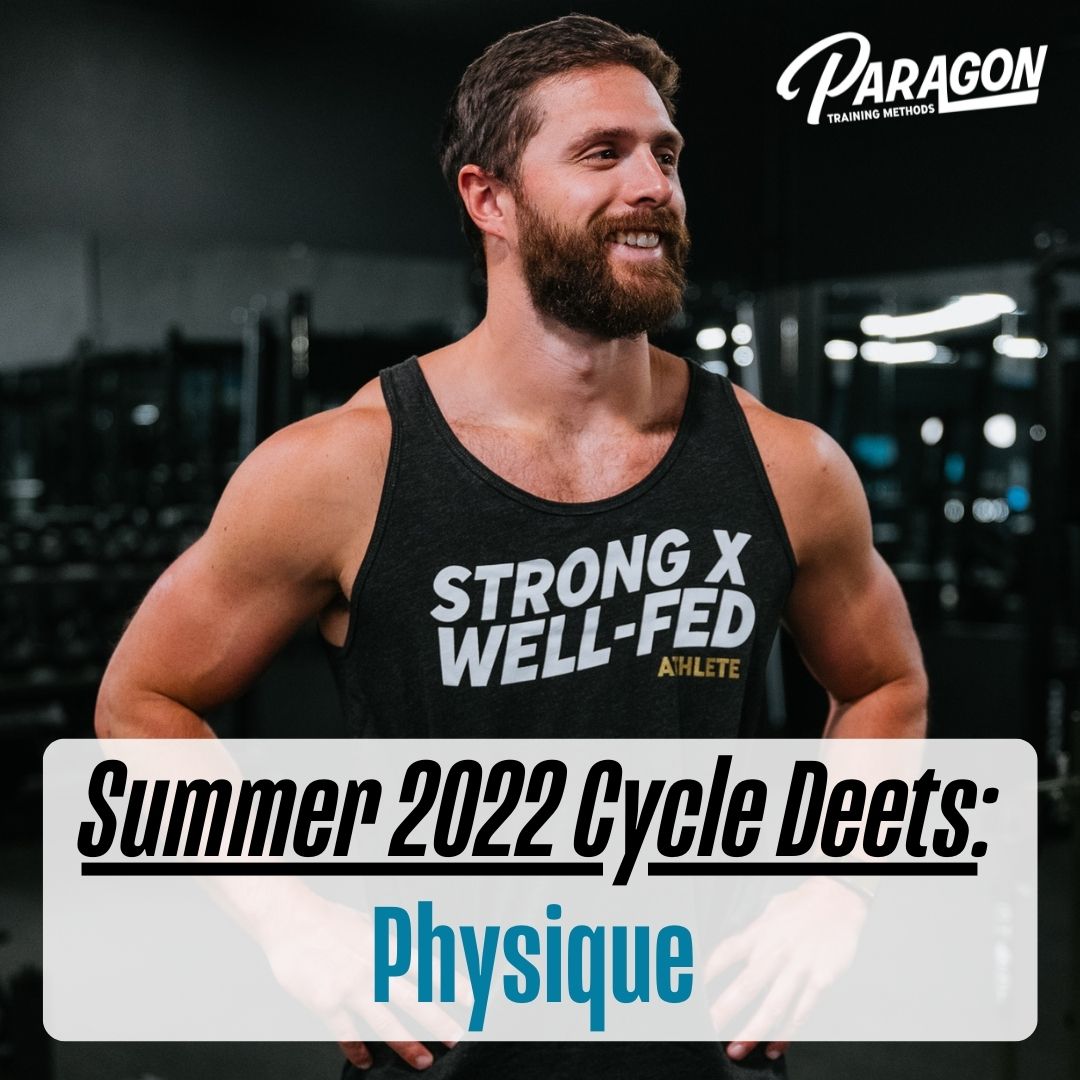 Physique is our bodybuilding and strength training program for those who want to look and feel damn good. It’s also our most popular program!

The Quick & Dirty About Physique:

Physique Is For Those:

This 12-week cycle is part of the 24-week periodization model we follow, where 12 weeks are spent doing “hypertrophy” (muscle building) training, followed by a 6-week strength phase and a 6-week metabolic phase.

You can think of these phases on a spectrum, with hypertrophy being in the middle (the most well-rounded stimulus). Then strength is just slightly lower reps and longer rest periods. Metabolic is going to be slightly lighter weights with shorter rest periods. 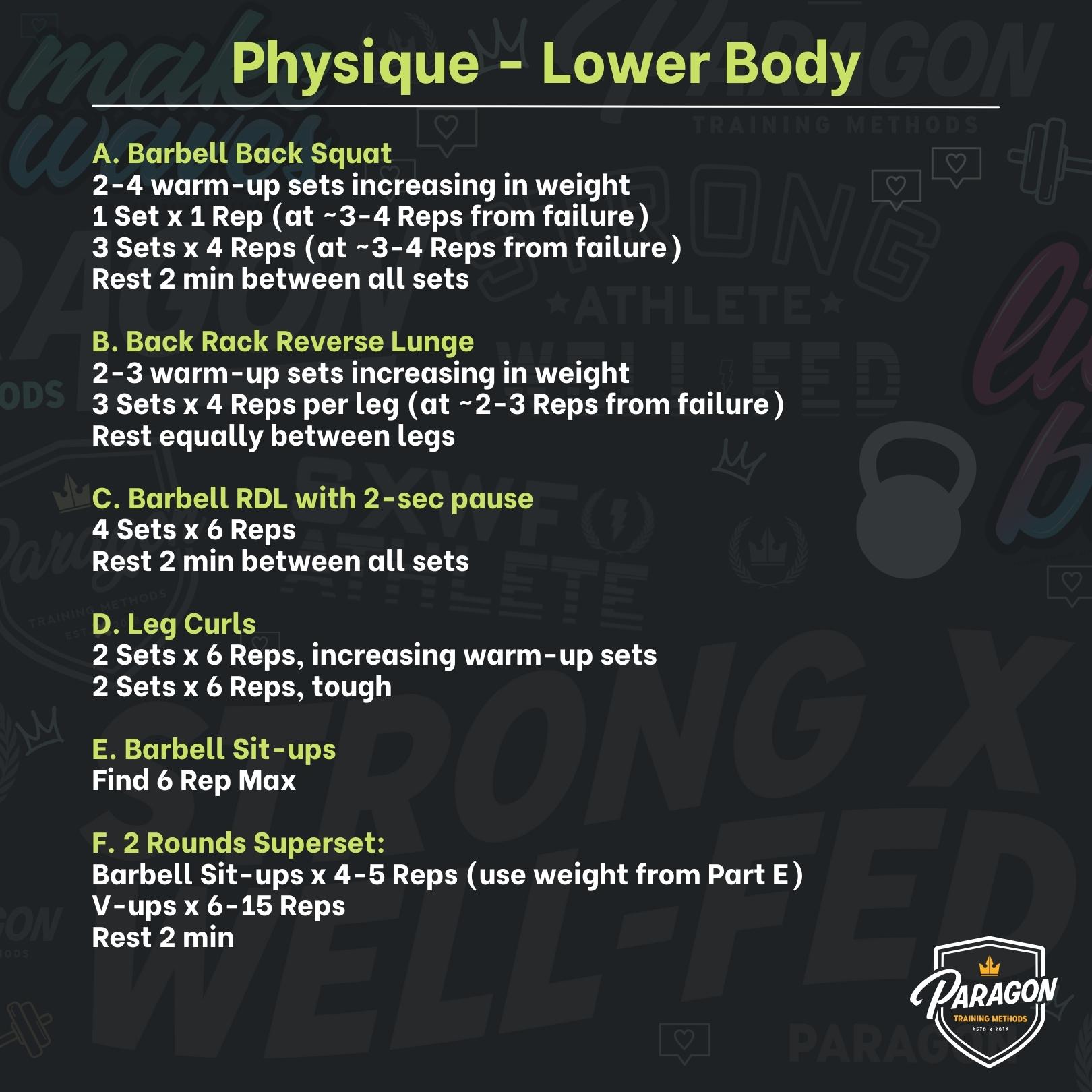 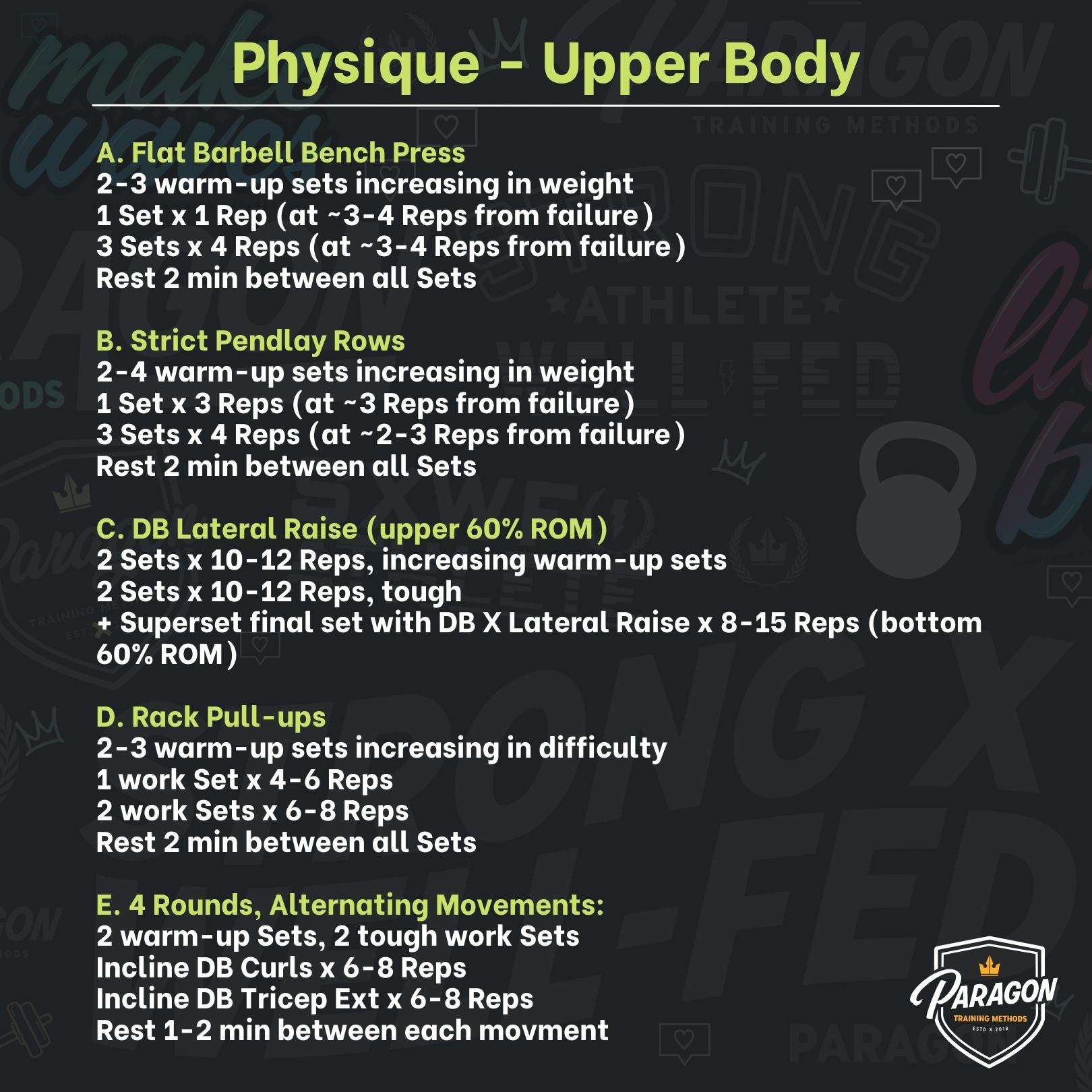 How This Training Cycle Works:

Before I get into the science and intricacies of what makes this model so effective, we should first touch on some important stuff for this cycle.

The progression model and structure of the repeating movements are quite different from the last cycle.

This is what we did last cycle:
A. 6 sets of increasing load to one top set, where we dropped reps each week. In this cycle, the progression model is outlined just below.
B. Back squats were a repeating movement twice (once for strength and once for speed). In this cycle, they only appear once (for strength). We added Back Rack Lunges as a second leg movement.
C. We had Squats and Deadlifts on the same day. During this cycle, they are on separate days.

How To Progress This Cycle:

In this cycle, the deload week is quite important. It acts as an introduction to the progression over the next 6 weeks. It will help you establish the working weights you will be using going forward.

Progression Model:
The rep scheme and progression model is called wave loading. It goes 6-4-2, then 5-3-1, decreasing reps each week. You can see how it should play out below.

Specific Example:
Assume a 100 lb “10-rep max” for a lift. This would mean 6 reps would be “4 reps from failure”
*The exact weight jumps and progression will look slightly different for everyone.

Additional Note on Single Rep Sets:
Many of the repeating movements will use a “single” rep as a primer before lowering the weight slightly for the work sets (wave-loaded sets). This is a popular practice in the strength world. It appears that the CNS (Central Nervous System) can use this heavier, but SUBMAXIMAL, effort to increase the effectiveness of your subsequent sets. It’s sort of the idea that if you feel something heavy, the actual work sets will feel subjectively lighter.

As the cycle progresses, these single reps will become heavier, until the final week, when you “test” that top single. These small “micro exposures” to doing singles each week should have a positive effect on your performance during testing week.

1. Strength phases provide you an opportunity to assess your progress at a much more tangible level. Yes, we can get stronger and set a “PR” in the 10-15 rep range, but being able to say “I set a PR in a 1, 2, or 3-rep max” is something we can hold with us as an emblem of our hard work and dedication. Not to mention, lifting heavy has a certain grit and determination associated that isn’t quite the same with higher rep ranges.

Ok, now onto some science 🙂

2. Re-sensitization to the “hypertrophy” stimulus is one major reason. The research behind this idea is building momentum, though I wouldn’t say it’s fact at this point. The idea is that our bodies are extremely resilient, and therefore adapt to a given stimulus, making it more difficult to continue to make progress without altering the stimulus temporarily.

A good analogy here would be what happens with continuous exposure to the sun. When the stimulus is new, we adapt quickly, and we can see skin changing to a darker color. As we do this more and more, we have to stay out in the sun longer to elicit an adaptation.

The sun exposure is much like training volume during a hypertrophy phase. Instead of having to do more and more, we can change stimulus temporarily and allow the body to “de-train” that stimulus slightly (avoid sun exposure), and then come back with a renewed ability to manifest these adaptations.

3. Potential hypertrophy benefit of preceding a hypertrophy phase with a strength phase. There is a recent study by Carvalho and colleagues (https://pubmed.ncbi.nlm.nih.gov/33241958, 2020) which demonstrated exactly this idea.

Many studies are now showing that STRENGTH is increased faster staying further from failure. The rationale is based on the idea that strength development is a result of total force production.

Force = Mass x Acceleration, so we want to keep the concentric speed faster (avoiding the grinding reps that slow); increasing the force applied.

In a recent study by Karsten and colleagues, one group trained 4 sets of 10 reps to failure, while the other group used the same weight (approx. 10-rep max), but completed 8 sets of 5 Reps (leaving 5 reps from failure each set).

The group that left 5 reps from failure had better strength gains! This has been confirmed in practice, among a wealth of top-level coaches, too!

Ultimately, this cycle is about building Neural Efficiency across the musculature, while re-sensitizing to some of the hypertrophy stimulus.

The cycle will be followed by a short “metabolic” phase. This is composed of supersets, giant sets, extended sets, and other techniques to help the body to become more efficient at clearing lactic acid (and other metabolites).

Details of the Metabolic Phase:

Following the 5-week strength cycle, we take a deload week, then move directly into a 5-week “Metabolic” phase.

After a strength cycle, work capacity is lower. This is a result of the lower reps and less time under tension, meaning less impact on our cardiovascular system. In a strength cycle, you don’t really get a great pump from training because you don’t have a lot of metabolite build-up in the muscles.

The weight feels heavy, and the muscles fatigue, but not with the same burning feeling they get from higher rep and superset sequences. This is simply because the body is de-trained to the metabolic stimulus. Therefore, you should find that your muscles are extremely sensitive to this very different training style. Pumps will happen more rapidly and stay for longer. You may even notice some muscle volume increases during days off training, as all the nutrients are shuttled into the cells.

In this cycle, there will be a few major differences from the prior metabolic phase.

The rep schemes and repeating movements will change after 3 weeks and the entire approach to training will change as we shift the objective.

1. Systemic: This is all about work capacity; increasing your ability to recover “systemically” between sets. An applicable example here of how this can help your training would be to think about doing multiple sets of back squats. This can be extremely fatiguing, not just for the working musculature, but for the system as a whole. Now, let’s say you could achieve the same effort level with 2 minutes of rest between sets, instead of 3 minutes, this would mean you could do more volume in less time!

This can be extrapolated across an entire day of training… Furthermore, being systemically conditioned can help you recover faster session to session, as well!

In this cycle, the circuits won’t be quite as daunting as the last cycle. With the new split, we now have the ability to combine lower and upper body into the same circuit, which will HELP the desired “whole body” conditioning component, and also make it easier on the individual muscle structures overall.

2. Local: This is all about clearing metabolites quickly and efficiently within a specific muscle group (“lactic acid” being the most commonly known). As you work your way through a set, it begins to burn in the later reps. This is the result of metabolites building up within the muscle, and being unable to “flush” these metabolites fast enough.

Think about a Squat movement. You can sort of cheat the “pain” by resting at the top to temporarily flush this lactic acid. But in many ways, we would much rather see you “lean in” to the accumulation of metabolites, and force the body to adapt and get better at flushing it, versus looking for a way out of the pain cave.

Through this local metabolic training, we can get better at flushing these within individual sets, as well as limiting the recovery time needed to flush them between sets.

In this cycle, the local metabolic work will appear in the form of 6-8 sets of 8 reps for the SAME MOVEMENT, with only 30-45 seconds of rest between sets. These will be performed with approx. a 15-RM weight (which will be established on the pre-cycle introduction week). We also use a good dose of “same muscle group supersets” where you will go directly from one movement to another movement for the same muscle group.

Overall, the metabolite portion of the periodized training year is almost always the shortest. This is because the body really does create these adaptations super quickly. We can get in there, see tangible improvements in recovery in a few weeks, and then get right back into some productive hypertrophy training… as we’ll see in the Fall 2022 cycle 🙂

Stay In The Know 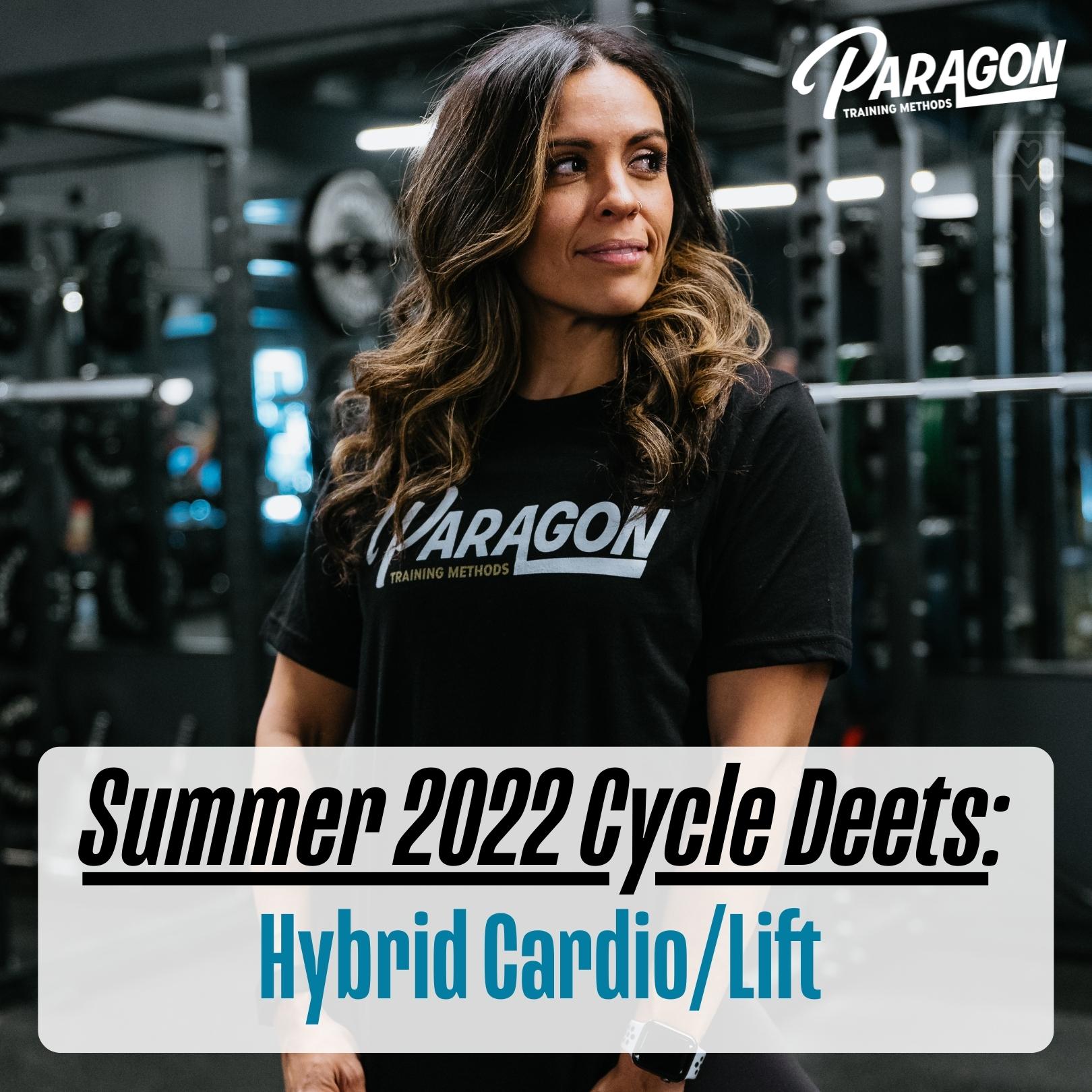 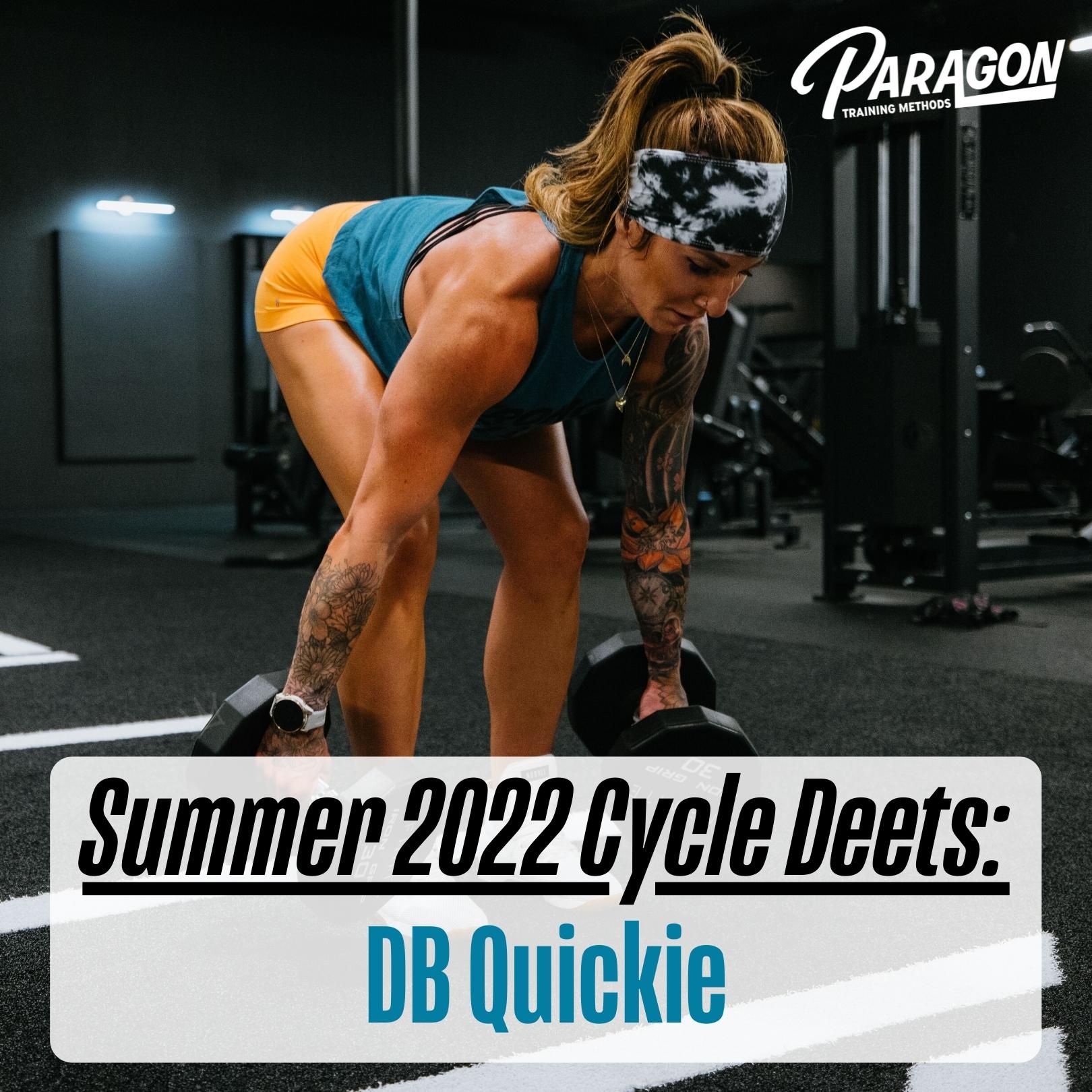 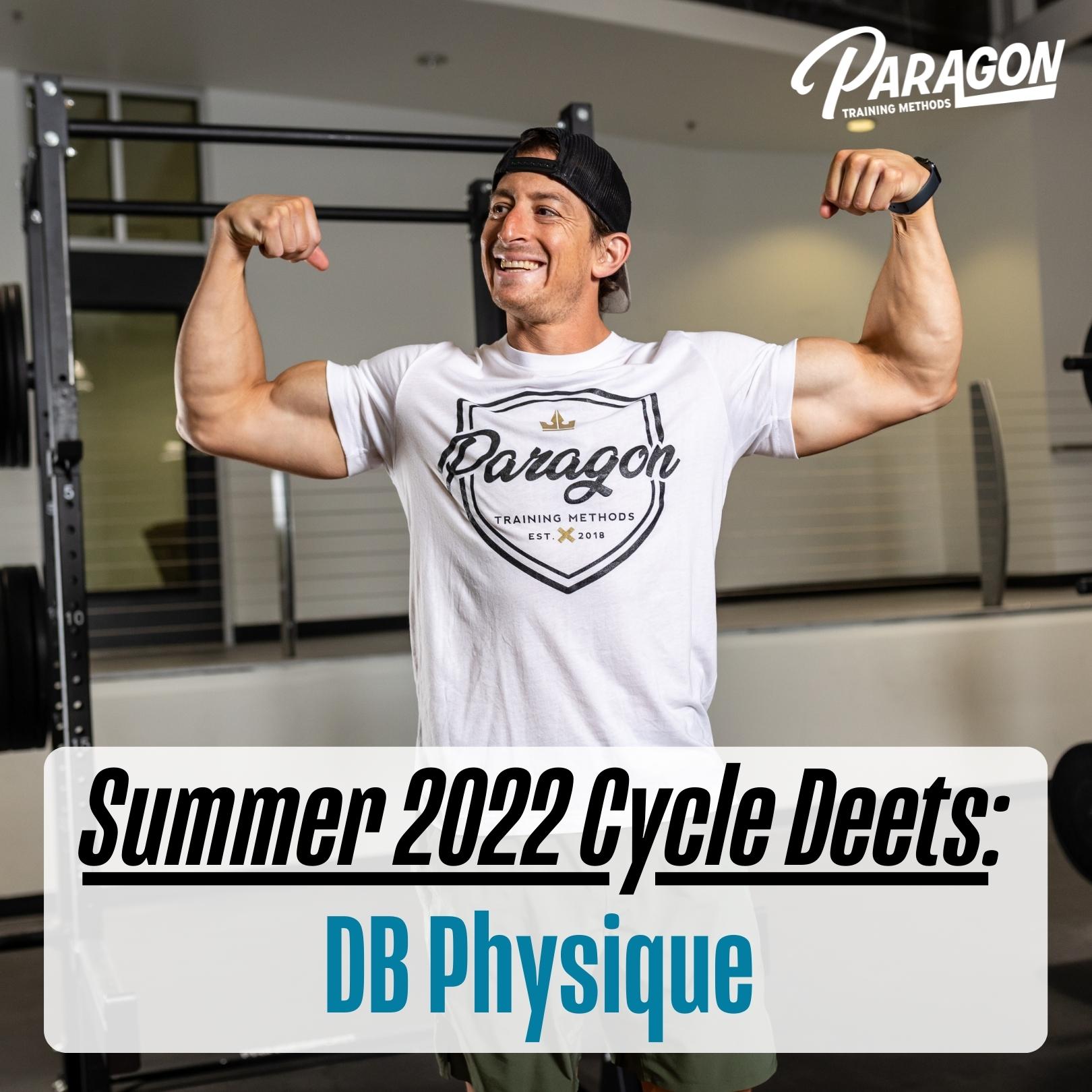