Repeating Movements and Modifying Parts C, D and E In Our Training 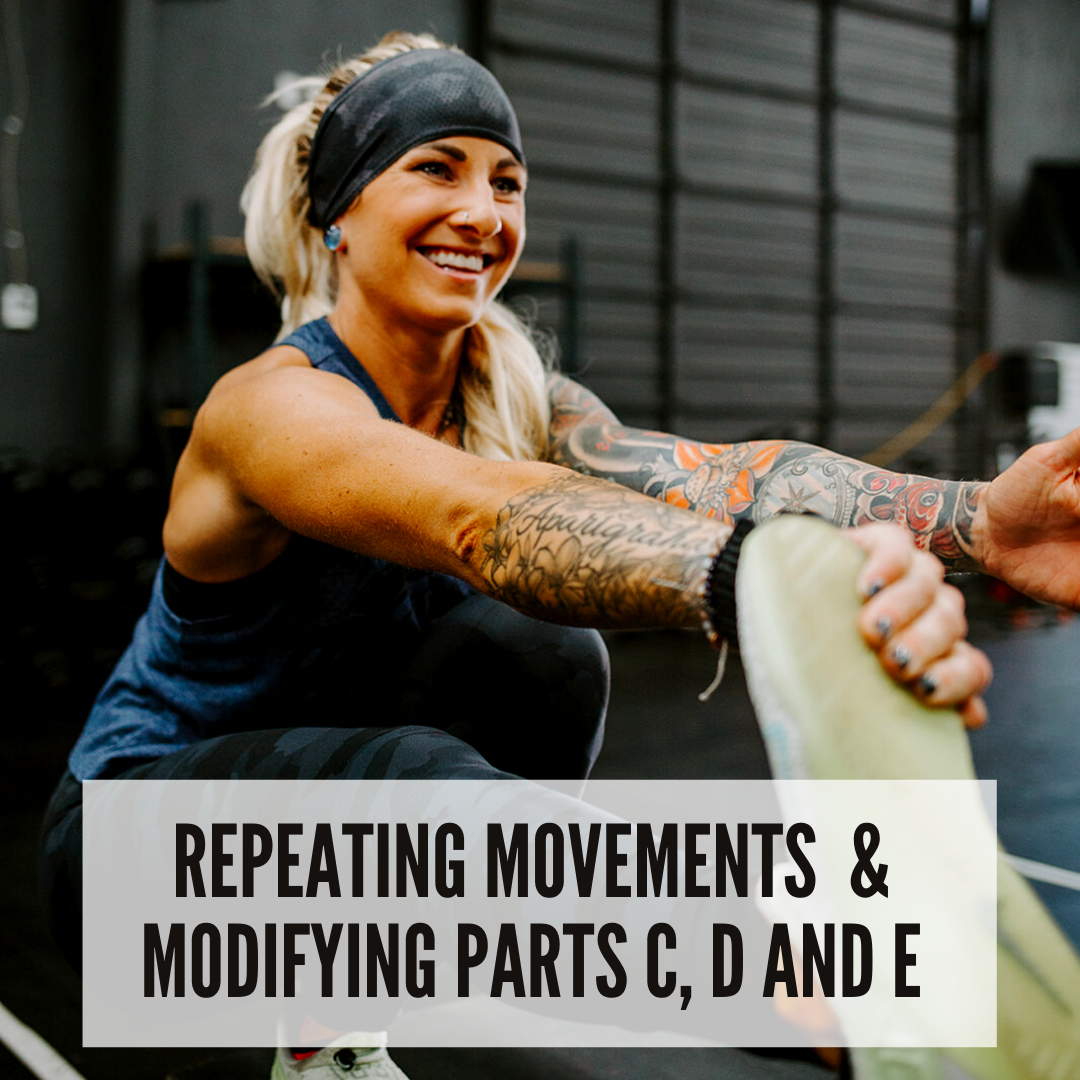 Repeating Movements and Modifying Parts C, D and E In Our Training

The Repeating Movements and Modifying parts C, D and E

The purpose of this article is mostly to discuss the level of freedom that you have in parts C, D, and E, and to provide a framework for you to use in case you need to modify these exercises (such as crowded gym, equipment limitations, injury etc…).

Before diving into that, let us quickly talk about the repeating movements.

These movements are chosen to cover the six main movement patterns in the body.

It is very important that these movements remain unchanged for the duration of the training cycle. This of course assumes that there aren’t any limitations or overuse injuries associated with that specific movement. If there are, you can certainly swap a repeating movement out for a similar movement pattern. Then you would make sure to stick with that replacement movement throughout the duration of the cycle.

We keep these movements consistent week-to-week as a means of diagnosing whether progress is occurring. While the objective is to increase effort/difficulty week to week on these exercises, it is not actually the WEEKLY progress that is the main diagnostic tool at use here. The more apt utility would be to compare “week 5” of each mesocycle. This is a period of time that is 6 weeks apart, and takes place in the week prior to deload (so the week in which we intentionally push sets close to technical failure).

Using the repeating movements in this manner will allow you to assess whether progress is occurring; whether the recovery and the dose of stimulus are sufficient to elicit the adaptations we want.

If adaptations are NOT occurring, the reason is almost always insufficient recovery:

– I would guesstimate that 70-80% of the time, lack of progress is a result of under-recovery and too much volume.

– The other 20-30% of the time, it can be attributed to another issue, such as not enough volume, or poor exercise execution, poor nutrition etc…

The REPEATING MOVEMENTS are the most important part of our programming! They are the beacon of guiding light that tells us that what we are doing is working.

The ACCESSORY movements are written intentionally for the purpose of the following reasons. These are listed in order of importance:

The dose of volume is the most relevant consideration here. This is the total number of sets for each muscle group. While the “optimal” number of sets per muscle per week will vary person-to-person, the prescription in the programs should do quite well for 80%+ of trainees.

If you have incredibly effective technique, where every rep is maximally stimulative, you may find that you don’t need quite as much as prescribed. This is an INTERNAL sense, and not something that I could assess for you via video (beyond a certain point). It’s something that you feel, and you will know if this is occurring because you will have a sense of “why do I need to do a third set; I’m already fatigued and stimulated about as much as possible from two sets.”

In this case, the subsequent set would just be causing exponential increases in fatigue instead of increasing stimulus.

The takeaway is that most people should strive to keep volume mostly the same as is written. I think this is probably intuitive, and most people aren’t going and completely overhauling parts C, D, and E (but rather making small modifications based on equipment).

Many people don’t realize that different movements will overload the muscle in a different portion of the range of motion (and that this will drastically impact stimulus and fatigue cost).

Think simply about a Bicep curl. Depending on where we place the elbows in relation to the torso, the stimulus (and fatigue) of the exercise changes.

We also know that MUSCLE DAMAGE is significantly higher in movements that overload the lengthened position (RDL, Incline curl, DB chest Fly). This makes sense as you will tend to get more sore from these exercises.

Movements that are overloaded in the SHORTENED range are significantly less damaging (Leg Curl, Preacher Curl, Chest Crossover). You have to do a lot of sets to get sore from these exercises. The majority stimulus from these will be metabolite-based in the local musculature (less systemic fatigue).

Similar levels of nuance exist across all exercises. I’ve spent a lot of time discussing elbow position in a Row and how that drastically changes the stimulus of the movement.

Wide elbows that go out like a “T” will ALWAYS ALWAYS train the rear delts, rhomboids, lower traps (essentially the “upper back”).

Elbows that travel tight along the body while driving down towards waistline will prioritize the lats. The lats literally turn off as the elbows travel away from the body.

In the spectrum of leg training, the same ideas apply to movement selection. A leg curl variation overloads the hamstring in the shortened position, while the RDL overloads it in the lengthened position. There are also massively different fatigue costs between those two movements as referenced above.

In the case of the quads, we often get the question about subbing the “at home leg extensions” for a heels elevated goblet squat. This isn’t quite the same thing. The Rectus Femoris (largest quad muscle that crosses the knee and the hip) is not trained completely through a squat-pattern movement.

To fully train the Rec Fem, we need to complete knee extension IN ABSENCE OF hip extension (when we squat, we extend the knee and the hip simultaneously).

This isn’t to say that you couldn’t goblet squat instead. It’s more just trying to provide context and a rationale for exercises selection (and then you can decide how important that is to you).

This one is the least important, because we know that muscle grows pretty equivalently set for set with anything from 6-30 Reps (close to failure).

With that said, there are some considerations with the rep ranges that are programmed for the accessory movements.

An example of #2 would be in the Powerbuilding cycle. The repeating movements were super low reps (3-6 rep sets for the most part). To provide a contrast in stimulus and fatigue, the accessory movements were purposefully programmed for 12-25+ Reps. This was to elicit a metabolite effect, which wouldn’t be able to take place if the rep were lower (for example if some decided to do sets of 8-10 on an accessory movement instead of the 15-20 reps programmed).

While I program a number of alternatives for most movements (for Example: a cable curl, a DB curl, an EZ bar curl).  Your gym may not have the exact equipment to execute as prescribed, but feel free to sub as needed with a movement as close as prescribed.